Inclusion matters, even in the STEM field

Andrew LaPrade & Laurie Machida, student leads with the Special Olympics Unified Robotics, are high school students on CyberKnights TEAM 4911 at King’s High School.  The CyberKnights were the founding First Robotics Unified Team created in 2015 under the leadership of Eric Rasmussen, Head of School at King’s Schools.  The Special Olympics Unified Robotics is a first-of-its-kind program that brings the sport of robotics to high school students with and without disabilities, uniting students of diverse abilities as teammates and competitors on the field of play.  Athletes and Partners work 1:1 designing, building, and programming robots with LEGO® MINDSTORMS® kits for a unique game challenge.  Each participating school can have one, or multiple, robots competing in the Championship Tournament at the end of a six-week build season.

The CyberKnights reach out a diverse group of students, who are typically underrepresented in STEM fields.  Their mission is to inspire the future leaders of tomorrow and increase opportunities for all students in STEM education.  Former Cyberknight, Delaney Foster, was honored this past May as the Champion for Inclusion at UW’s EEU for her part in developing Unified Robotics Special Olympics. 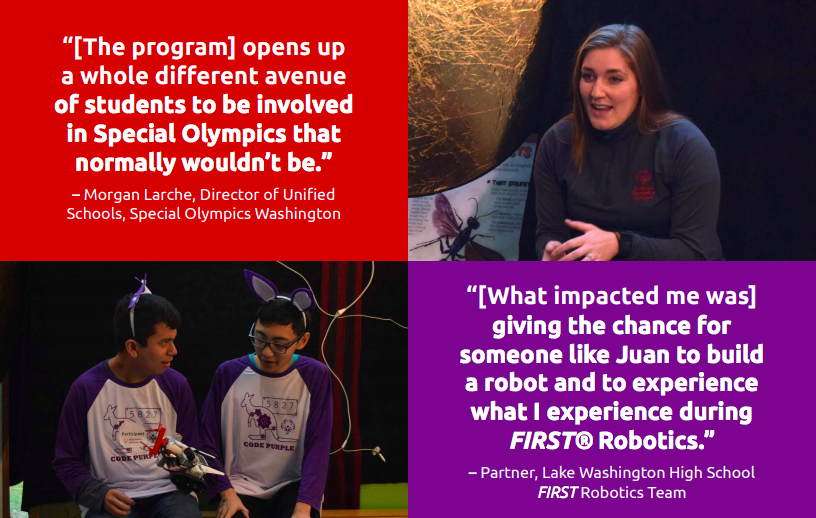 “Our world is filled with technology and engineering wonders, scientific breakthroughs, and mathematical discoveries. Students with intellectual disabilities need equitable opportunities to pursue their interest in these fields.  Students in the general education population have discovered the potential of their peers with intellectual disabilities. The athlete-partner system of Unified Robotics puts that impact first-hand, as each team of athletes and partners work together for six weeks to design, build, and program a LEGO robot to compete in a tournament-style game. Inclusion matters. Diversity in schools and the workplace makes our communities stronger. Unified Robotics empowers young people to be agents of change and is creating socially inclusive schools where no student is excluded from opportunities to awaken and advance their passion for STEM. Thank you for your support in strengthening and expanding this emerging program.”

As a junior at King’s High School in 2013, Delaney was inspired to started an afterschool robotics program between King’s and Roosevelt High School’s special education program where her sister Kendall was a student with autism.  Kendall had enthusiastically attended King’s robotics practices and competitions in support of her sister, and Delaney realized there were not any options for Kendall to experience robotics activities for herself at her own school or in the community. Delaney wanted to change things for her sister, and worked to create a program where Kendall and her peers could explore and develop their skills in robotics. Delaney chose to model the program on the Special Olympics Unified Sports program, where students with and without disabilities participate on recreational teams together.

The Unified Robotics pilot program started in 2013 with 20 students.  Delaney was impressed by how quickly the program expanded stating its impact was immediate and profound.  “Students of all abilities can contribute to technology and have meaningful learning experiences in Unified Robotics. I am in awe of the creativity and innovation I have witnessed.”